Slipapplication is determined by blanking off the discharge of a blower and rotating the blower at the speed that will generate a 1 psi at the discharge. This is also referred to as 1 psi slip.

Blower or vacuum pump inlet volume can be calculated with the following equation:

If cfr is not known for a unit, one could estimate it with the following equation:

This calculation for cfr assumes an 80% involute profile design.

The brake horsepower required to drive the blower is calculated with the following equation:

A quick method to calculate Brake Horsepower to get you in the ball park is to use the following equation:

The formula that is used for a Whispair© unit (jet – assisted) is:

Fg must be obtained from a graph that has gear tip speed on the x-axis and Fg on the y-axis. This curve is specific for a particular series of units or a specific unit and is typically proprietary for the blower manufacturer.

Friction Horsepower per 1000 RPM can be defined as follows:

FHP/1000, FHPN, FHPmax, and Nmax are supplied by the manufacturer.

Gear tip speed in fpm (feet per minute)can be calculated with the following equation:

We can now calculate temperature rise on the unit. Temperature rise is a critical calculation since the blower has limits on thermal growth. To much temperature rise and the impellers will expand into the headplates causing the unit to seize and possibly causing extensive damage to the unit.

Two formulas can be used. The first formula is only applicable to air and is as follows:

The following formula can be used for any gas:

These two rules can be expressed mathematically as follows:

If you want a printable version of this article, please click here. 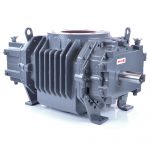 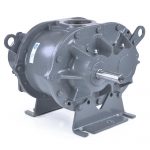 Proper V-Drive selection is essential to achieve maximum life for your blower and vacuum pump. Improper sizing or installation of a v-belt drive can shorten the life of the blower or even cause failure. Roots has provided a means to...